As I frantically searched for tips to remove the musty smell of my 1990s Coach bag, a recent score on ebay I was determined to keep, I stumbled upon photographs of 1960s handbags designed by Bonnie Cashin, a pioneer of American women’s and designer for Coach. I was blown away by the tan mod sling bag, a collector’s item that fetches princely sums from those lucky enough to find and afford it. The bag is stunning because it is functional and understated and timeless in its design.

I knew nothing about Cashin when I came across her clothes and handbags, but knew enough to know she was an important figure in American fashion history. As I often do when I want to learn more about a deceased icon, I immediately searched for her obituary in The New York Times.

The more I learned about the awesome contributions this woman made to modern fashion, the more appreciation I had for the design of the Coach handbags I own. Her influence permeates the brands whose lead creatives, unlike her, have nothing to do with the accessory that may be peddled as the next “It” bag.

A design prodigy from an early age, Cashin was a keen observer of the ways we use everyday items and the way we move; for Cashin, freedom of mobility and function were as important as modern design and her creations reflect all of that. 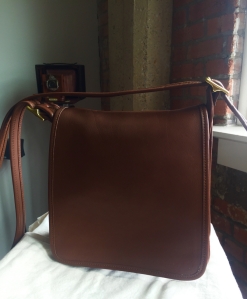 For instance, a Times’ appreciation in the wake of her death noted that she incorporated a bag into clothes as a result of her experiences hiking in the Hollywood Hills: she wanted her hands free when carrying her art supplies. The brass turn lock that has sold millions of handbags for Coach — and captivated my teenage self enough to resolve to own the brand’s iconic briefcase — was reportedly inspired by fasteners on her convertible’s rag top. (I grew out of the briefcase, but own the Willis bag.)

After nearly 10 days, several baking soda-filled bags, hours of sun exposure and a 24-hour treatment with dryer sheets, the musty smell in my brown Legacy bag is gone. I can’t wait to use it again; I had once but the musty smell was too pungent. It may become my new favorite handbag.

I bought the Legacy because most of of my handbags are black, and I needed to break up the single-color palette. Among my inventory is a black Marc Jacobs with an industrial-style gold-toned zipper around the bottom. Now that I know, however, that Cashin introduced industrial zippers into her designs in the mid 1950s, I’ll never look at that bag the same again.

It’s another piece in my closet that reminds me that her legacy — a passion for modern design and innovative creations, motivated in part by giving women the freedom to move and express their empowerment — endures.